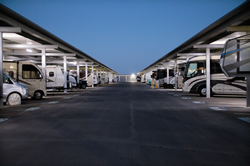 Hassle-Free Covered RV Storage this spring celebrated the grand opening of its flagship facility in Chandler, Arizona, and inaugurated a new project in the Phoenix metro area.

The company is a division of Commercial Property Trustwhich also operates the Bargain storage Mark. The companies collectively own and operate three covered RV storage sites in Arizona and Texas, with five other projects in various stages of planning and development.

“Our business is once again in a growth phase, and the new location in Chandler marks our first VR development,” said Barry Raber, President and CEO of BPT. “This is our flagship property and a true showcase, providing our guests with a safe and welcoming environment to secure their valuable recreational vehicles.”

The 31-acre Chandler facility is now the largest covered RV site in Arizona, totaling more than 550,000 square feet, or 1,224 spaces, of enclosed, covered and uncovered parking. The company has invested more than $5.5 million in developing the site since its acquisition in November 2020, doubling its capacity, improving security and amenities, and building a new visitor center.

The facility, which held its grand opening on May 24, even includes a branded dog park.

Carefree Covered RV Storage will open a new location at St. Paul, Texas, a suburb of Dallas, this summer. The company broke ground on a fourth site, a 10-acre site in Queen Creek, Arizona, which is expected to open in early 2023. Three more sites, totaling 39 acres in Arizona and Texas, are controlled by the company and will be developed.

“I want to thank our diligent development team for completing this high-quality project on time,” Raber said. “And none of this would have been possible without the support of Development of Lone Butte and the Gila River Indian Community.”

Share the article on social networks or by e-mail: